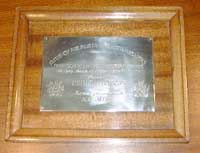 Awarded to a member or members of a crew whose outstanding behaviour and action contributed to the saving of their aircraft or passengers.

On the night of 10 February 2019, Flight Lieutenant Medford was the captain of a CH47 conducting overseas operations. Atrocious weather across the mission area was encountered, with a complex combination of torrential rain, low cloud with embedded thunderstorms and zero ambient light. The formation was operating toward the limit of crew capability, with the appalling flying conditions enduring for much longer than had been forecast. The electro optical devices, used for low flying, were barely functioning due to the moisture in the air and the task had to be adapted to ensure safe delivery of the mission critical passengers. As the formation continued towards a remote landing site, both Medford and the rear crewman noted the strong and distinctive smell of hydraulic fluid.

The crewman immediately investigated and quickly became covered in vaporising fluid from an uncontrollable leak. Medford immediately reduced speed to assess the severity of the situation and simultaneously ordered the isolation of the hydraulic sub-systems. The situation in the cabin was deteriorating rapidly due to a constant spray of highly flammable fluid and the rear of the cabin became saturated. Within minutes, the mist reached the cockpit and covered the flying instruments just as the cockpit warning panel illuminated.

Medford immediately ventilated the cockpit to clear the hydraulic mist and regain his already poor visual references with the ground, no more than 100 feet below. The vaporised fluid had contaminated the entire internal body of the aircraft, with map displays near impossible to read and even the inner lenses of the night vision goggles being coated in a hazy film, reducing visibility further. With the emergency now contained, the formation continued to battle through the adverse weather to the nearest landing site. Medford carefully balanced the risks of continuing versus the risk of setting the aircraft down in potentially hostile territory. With senses already heightened, the aircraft warning panel indicated a further loss of a flying hydraulic control system, resulting in 2 of the 3 systems now indicating inoperable. This emergency usually requires an immediate landing, as a loss of the final system would render the aircraft completely uncontrollable. However, given the hostile location, Medford decided to continue flight and ensure the aircraft, crew and passengers were not exposed to the significant ground threat.

Medford’s leadership continued upon arrival at the remote landing site. With a clear mind and recognising the operational requirement to keep the main landing site open, he negotiated an alternate site and conducted an alternative shutdown procedure to avoid ignition danger.

Throughout the mission, Flight Lieutenant Medford demonstrated an outstanding and essential clarity of thought and exceptional leadership, judgement, skill and aviation awareness.  He is a thoroughly deserving recipient of the Hugh Gordon-Burge Memorial Award.