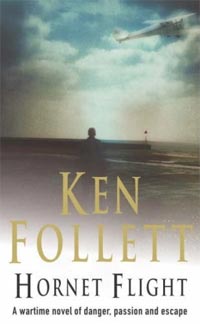 Ken Follett's latest book, Hornet Flight, is based, to some extent, on actual happenings. In 1941, with no military forces in Nazi controlled Europe, Bomber Command was Britain's only way of fighting back – and the RAF were losing an unacceptable number of aircraft to the Luftwaffe. Clearly, the enemy were in possession of information regarding our raids. Spies? Treachery? Advanced technology? "Do something about it," ordered Churchill, "or Bomber Command will be finished by Christmas".

From slender clues a Bletchley Park based intelligence analyst begins to suspect the presence of a secret experimental radar station based in occupied Denmark. At the same time a brilliant young Danish student, who travels around on a home built steam driven motorcycle and dreams of studying under Nils Bohr, stumbles on a strange military installation on an off-shore island near Morlunde on the west coast of Denmark.

Harald Olufsen, with the help of his heartthrob, ballet student Karen Duchwitz, succeeds in photographing and figuring out the truth of the mysterious German installation. It is urgent to reach the UK with the information ahead of a planned major air assault by the RAF. The only way is to restore a derelict Hornet Moth to flying condition and cross 600 miles of North Sea. With ingenuity, and a few curses about some aspects of Captain de Havilland's design, the Hornet Moth flies again and the day is saved. Not a great technical oeuvre on Hornet Moths, the book is nevertheless good fun with enough detail to intrigue anyone with an interest in the D.H. Moth family of aircraft.

Night Over Water, an earlier book also by Ken Follett, features a totally different aircraft – one of the dozen 70 seat B-314 Clipper flying boats built to order for Pan American by Boeing, nine of which were handed over to the US military in the early days of the war and three sold to the UK. Use of these aircraft during the war years included flying President Roosevelt to the Casablanca Conference in 1943 and Prime Minster Churchill to and fro across the Atlantic.

This book conjures up the golden days of air travel with much detail of life aboard a Clipper flying boat. Luxurious sound insulated surroundings, lounges, a dining room and 40 comfortable beds, all supplemented by gourmet "champagne and caviar" style catering supplied by attentive stewards, cosseted the passengers on their 30 hour trans-Atlantic journey. The Captain even had his own sitting room, aft of the flight deck. None of this came cheap, of course. The return fare of $675.00 was a small fortune in 1939 and the passengers were the movers and shakers of the day – royalty, movie stars, big business and presidents of small countries. Alas, this all came to an end after the war when the long runways built to accommodate heavy aircraft rendered the flying boats obsolete. However you can relive the lifestyle on your home computer with a Microsoft Add-on to Flight Sim 98, 2000 or 2002.

Hornet Moth (2002) and Night Over Water (1991) both by Ken Follett and published by Macmillan.