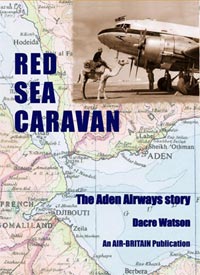 The Story of Aden Airways by Dacre Watson

This book covers the formation of Aden Airways, a subsidiary of BOAC, in March 1949, its development and operations and its final demise in June 1967. The airline was awarded the Guild of Air Pilots and Air Navigators Cumberbatch Trophy for 1961 in recognition of its operations in a difficult and hostile environment without serious incident. It is a work that includes considerable detail about the organisation, aircraft, timetables and personel all set out in a very readable style.

Having said that, it is not really something to read from cover to cover in two or three sittings; more, perhaps, to use as a reference book while also enjoying the personal reminiscences and excellent illustrations with which the main text is interspersed. In addition, appendix 2 includes 14 pages of background written by six men who worked for the company both on the ground and in the air, so one can get a very good idea what it was like to live, fly and work in and around Aden in the years after the Second World War.

Most of the flying was carried out with DC3 aircraft of which there were 13 in total and a brief history of these, and other aircraft which at one time or another flew Aden Airways services, is detailed.  Five accident reports are also included. Other appendices list the pilots, hostesses, stewards and flight clerks who worked for Aden Airways together with their starting date and there is a biography of the airline's founding Managing Director, Richard de Graaff Hunter.

Broadly speaking each chapter covers one operating year with emphasis where appropriate on particular aspects of the operation, such as the introduction of the Argonaut in 1960 or the Haj flights of 1952. Where the aircraft operation is described in any detail, as in the case of the Argonaut, the text is very obviously written by someone who knows aircraft; Dacre Watson has some 24,000 hours of both short and long haul flying in his logbook. As already noted, the text is liberally interspersed with illustrations, not only of aircraft and people but also of timetables, route maps and contemporary advertisements. The colour photographs, in three sections each of sixteen consecutive pages, are particularly evocative of the period and on their own they are a good enough reason to include this book in any serious aviation library. Dacre Watson has kindly presented a copy of his book to the Guild library at Cobham House.