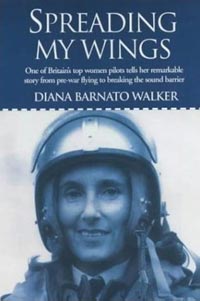 Spreading My Wings, Liveryman Diana Barnato Walker's autobiography, makes a welcome return to the bookstores almost 10 years after first publication as a hardback.

The book starts with a fascinating account of a young girl born in 1918 and growing up between the wars. Life in a wealthy family, continental holidays travelling with chauffeurs and ladies' maids, a 4½ litre Park Ward Bentley as a 21st birthday present (millionaire father was one of the Le Mans winning "Bentley boys" and one time chairman of Bentley Motors) and all the rest of it eventually made Diana want to achieve something on her own. This ambition took her to Brooklands where she spent her pocket money on a few hours flying instruction in a Tiger Moth, going solo after only 6 hours. "Don't break the airplane", pleaded her instructor, "it is the only one we have with a control panel". The airplane wasn't broken and Diana's total time increased to about 10 hours before the pocket money ran out.

However, Diana's aviation career really took off with the formation of the Air Transport Auxiliary. At the outbreak of hostilities in September 1939 Diana had volunteered as a Red Cross nurse but soon determined to apply for a job as a ferry pilot and was accepted into the ATA training programme. An amazing miscellany of flying and other skills assembled to form the core of ATA – Amy Johnson (lost in 1941 on an ATA mission); her husband Jim Mollison; Lettice Curtis, (Liveryman of the Guild and the first lady to fly a Lancaster); a bookmaker; a conjuror; a one-eyed, one armed fifty year old World War I air veteran and the legendry Poppa Fairweather who navigated "by cigarettes". He would chain smoke on a flight, seven minutes per fag, and by counting the butts, could calculate his time and thus distance on course.

A large part of the book is devoted to a wealth of anecdotes of Diana's years with ATA. She also writes with candour about her feelings and her private life. When flying Diana had a number of escapes from potentially dangerous situations, aided, she insists by her guardian angel, of whom we hear quite a lot, and the "Fellow Up Top". She is too modest to allow that her escapes were not only due to divine intervention but also to the fact that she was a 'damned fine airman! However, in her personal life she was not so fortunate. She became engaged to Squadron Leader Humphrey Gilbert in May 1942 who sadly died soon after in a Spitfire crash. Then her marriage to Wing Comander Derek Walker in 1944 came to a tragic end eighteen months later when Derek was killed in a P51 cash at Hendon.

With the end of the war bringing ATA activity to an end DBW determined to continue flying, and did so by obtaining her 'B' licence and then flying for the Women's Junior Air Corps. Flying cadets in a Fairchild Argus on air experience sorties called for a commercial licence as the girls paid a small fee for their trips.

Yet another major tragedy in DBW's life occurred in 1948 with the death from cancer of her adored father, at the unduly early age of 53. A few years later, after winning the Jean Lennox Bird Trophy for her work with the WJAC, Diana went supersonic! One evening in the Mess at RAF Middleton St. George the Wing Commander Flying, John Severgne, suggested Diana might like to fly a Lightning. Would she! But, of course, it wasn't as simple as that. Nevertheless, on 26 August 1963 and following clearance from the Minister of Defence (Air), Diana found herself flying a Lightning. Officially timed at Mach 1.65 (1,262 mph) Diana was, at the time, the fastest lady in the world!

After beating cancer herself, soon after her record breaking flight, DBW continued flying for a few more years with the WJAC; became Master of the local hunt; Commodore of the ATA Association and took up sheep farming in Surrey. From first solo in a DH 82 in 1938 to breaking the sound barrier in a T14 in 1963 and with many hundreds of hours and 125 different types in her logbook Diana Barnato Walker is certainly an Aviatrix Extraordinaire! And her book is still a good read!