The Dambuster who Cracked the Dam 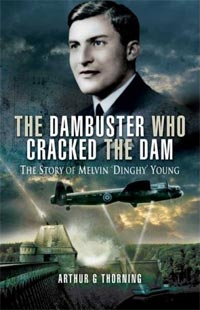 The Story of Melvin 'Dinghy' Young

So who did actually crack the dam? This rhetorical question aroused the author's curiosity and when he discovered that it was an illustrious fellow alumnus of Trinity College Oxford â€‘ albeit a few generations apart â€‘ he was propelled into a programme of research which ultimately resulted in this most commendable book on the life and times of Squadron Leader H.M. Young DFC & Bar.

This is not another book about the Dambusters' epic air raid of 16th/17th May 1943 on the Möhne and Eder dams.This story is about the interesting life of a very gallant gentleman, his family and some notable friends and colleagues.It just happened that Melvin (Dinqhy) Young was part of the team which successfully breached the dams.He also rowed for Oxford against Cambridge in the annual university boat race, but that also is just part of the story.

Meticulously researched, the Author has translated a mountain of information into a most readable narrative."The Dambuster Who Cracked The Dam" has all the ingredients of an historical novel; love, romance, success, disappointment, hardship, happiness and tragedy, but it is not a novel; it is biographical and definitely from the nonâ€‘fiction shelf!

By tracing and recording the eventful life of Dinghy Young through the memories of his widow, family, teachers, tutors and some notable friends and colleagues, the author has painted an interesting picture of a part of British and American Society as it existed in the latter half of the 1930's and the early 1940's. This covers Melvin Young's boyhood, school days in the USA and the UK, Trinity College Oxford, the University Air Squadron and The Royal Air Force.

The legendary Wing Commander Guy Gibson VC. leader of The Dambusters, selected Dinghy Young as his second in command of 617 Squadron for the raid on the dams.  Having completed tours on Whitleys in Northern Europe and Wellingtons in the Middle East. Sqn Ldr Young was clearly an experienced bomber pilot, but a few eyebrows may be raised when reading how little experience on type many of those brave men who participated in "Operation Chastise" had.  Travel with them at very low level and high speed across hostile territory for about six hours; a gripping experience which is all part of this interesting book which I highly recommend.