The Reconstruction of Warriors 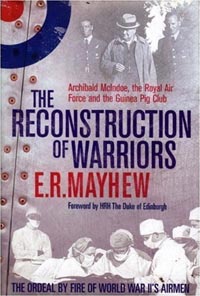 The story of the ordeal by fire of airmen of the Second World War – the Guinea Pigs – has been told before.  But Dr Emily Mayhew’s comprehensive new account makes absorbing reading as she describes the agony of the victims and the ground-breaking treatment they received at the hands of the eminent plastic surgeon, Sir Archibald McIndoe, and his team, at Queen Victoria Hospital, East Grinstead.

Even before war broke out, the Air Ministry's amazing presumption that tactics during aerial combat in any future war would largely resemble those used by the Royal Flying Corps some twenty years earlier, couldn’t have been further adrift. This fundamental error of judgement and lack of foresight would cost the airmen dearly.

In what amounted to a fiery cocktail of questionable choices, the author traces the fascinating scientific relationship between an airman’s burn and aircraft design, the positioning of the fuel tanks in relation to the crew, the deliberate omission of performance-reducing tank protection, the use of high-octane fuel and fighting strategies that exposed vulnerable surfaces to enemy fire.

With hindsight, it is clear that this was an accident waiting to happen.  And happen it did in large and tragic measure. From 1939 to 1945 serious burns to the RAF Home Force totalled 4,973: arms, hands, knees and faces took the brunt of the most terrible injuries.

Up until the end of the 1930s, any serious burns victims invariably died, most of them immediately and the rest within a few days.  Shock was a key factor as the body lost high amounts of fluid. This was followed by secondary shock as the body tried to compensate for the loss - and patients died literally from dehydration.

After 1939, however, with the introduction of plasma and saline transfusions to replace lost fluid, patients began to survive. So from the Battle of France in 1940 onwards, the first seriously burned airmen, who should have normally died from their injuries, began to appear for treatment.

The conventional treatment for burns victims that survived the initial trauma then involved very little surgery and mainly consisted of a liberal application of tannic acid. But while this might have been tenable for relatively minor burns, it was actually disastrous for major burns injuries and did more harm than good.

Archie McIndoe had been performing reconstructive surgery since the 1930s and had witnessed the viability of grafting skin to treat burns. Yet while he was considered among the best plastic surgeons of his day, even he was not prepared to be confronted with the total reconstruction of a burned face, nor with the scale of casualties that were to come his way.

In all there were four plastic surgeons assigned to civilian consultancies in 1938 as the country prepared for war. McIndoe’s domain was to be East Grinstead and the RAF and the soon-to-be-famous Ward 3, which was earmarked for his patients.

A charming man with a sense of humour, but with an independent streak, McIndoe used his civilian status to cut through red tape and rank to achieve the level of care and treatment he thought necessary for his patients' well being. He even regularly scoured hospitals across the country for burned airmen and arranged for their transfer to his specialist burns unit so they could benefit from his pioneering remedies.

Some of the aircrew that came into his care were quickly patched up and returned to operational duties, however, others faced years of treatment and many painful operations. McIndoe performed thousands of delicate innovative procedures using skin grafts as he gave his patients new noses, eyelids, ears and also new faces, where their own had been completely lost.

His other concern was how to restore morale to men who were in the prime of life, and therefore largely boisterous, energetic and mischievous.  One well-publicised action of McIndoe's was his insistence, much against RAF rules, that his patients be allowed to wear RAF uniform rather than the undignified hospital garb.

Above all, his was a holistic approach, believing that recovery and rehabilitation were linked not just to medical solutions but also to raising self-esteem and getting back to something as near to normal life as fast as possible. Quite apart from his unconventional hospital regime, where the odd pint of beer or cigarette was allowed, McIndoe encouraged his patients to go out and face the world regardless of their appearance.

He enlisted the help of the local community in this cause, which became used to seeing disfigured but highly spirited airmen enjoying life in their midst.  Furthermore, the civilian population quite rightly embraced the uniformed airmen as heroes, inviting them into their homes, providing entertainment and helping to raise funds for the hospital. The goings-on at East Grinstead were beginning to make news.

Public identity of the burned airmen was aided through the creation in 1941 of the Guinea Pig Club, a name that accurately described the experimental nature of the hospital treatment used.  Whereas the Club merely affirmed a camaraderie that already existed between the airmen, it did serve to bind them together into a definitive community and also socially.  Popular notion assumed that the 649 members were all fighter pilots, but by the end of the war 80% were bomber crew. While Canadian aircrew were among the earliest members, in addition to the British, there were also Australians, French, Czechs, Poles, Russians, South Africans and Americans. Membership was limited to those who had had surgery at East Grinstead and the staff who treated them. The Club published its own magazine, The Guinea Pig, and composed an anthem to be sung at reunions.

The Reconstruction of Warriors is, without doubt, a compelling read that chronicles an important but chilling episode in the history of the Second World War. Supported by many gripping first-hand accounts, the 200-page hardback book includes a Foreword by HRH The Duke of Edinburgh. It is illustrated with photographs and drawings that demonstrate the horrors and humour that were the legend of East Grinstead. Dr Mayhew, the granddaughter of a nurse at Queen Victoria Hospital who worked with Sir Archibald McIndoe, has faithfully researched her subject, and is the first to include the records of the Guinea Pig Club held at the Public Records Office.