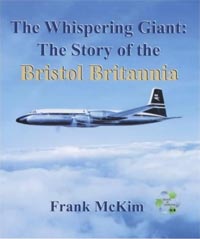 THE STORY OF THE BRISTOL BRITANNIA

This is not the first book dealing with the Bristol Britannia but it must be classed among the very best on the subject. The author takes us through the design, development and manufacturing stages of the aircraft and covers the numerous difficulties encountered during flight trials in considerable, but highly readable technical detail. The usual story of many expressions of interest from the world's airlines followed by few firm orders follows, as does the almost predictable account of UK governmental meddling which robbed the aircraft of the Orion engine as a replacement for the Proteus with its well-known icing problems.

In traditional manner the book moves on to an airline-by-airline account of the life of the aircraft. Pride of place in this section must go to BOAC who as launch customer brought the aircraft into service and suffered the inevitable trials and tribulations associated with such a task. The chapter describing the 23 Britannias in service with RAF Transport Command jogged not a few memories for your reviewer who cut his teeth in the globe-trotting business with 99 Sqn at RAF Lyneham between 1967 and 1970 (I wonder if New Zealand Guild member Mark Simich recalls the 1970 flight into exile of the Sultan of Oman referred to in this chapter - I certainly do!).

Later chapters cover El Al's pioneering activities in what were at the time ultra-longhaul operations, and the part the Britannia played with the many and various independent and charter airlines, such as British United, British Caledonian, British Eagle, BKS, Britannia, Monarch and Laker Airways to name but a few.  The author also gives well-deserved credit to Cubana Airways who operated the Britannia continuously for no less than 25 years.

With the arrival of the 4-jet airliners and the disposal of the RAF fleet in the 1975 defence cuts after some 16 years service, the days of the Britannia as a passenger aircraft were clearly numbered. However she went on to enjoy a new lease of life in the freight role and the author is to be congratulated for his detailed accounts of the many small operators who continued to operate the aircraft with varying degrees of commercial success.  The book concludes with an account of the recovery of the last airworthy Britannia from Zaire to Kemble, Gloucestershire where she now resides back in her original RAF colours as Britannia C Mk 1 XM496.

Frank McKim is to be congratulated in producing a book that is a masterpiece in historical research and a highly readable one at that. The book is comprehensively indexed, the histories of every single Britannia lack for nothing and the photographs with which the book is illustrated must be singled out for praise.

In summary then, a book to satisfy both the serious aviation history buff and the reader who simply wishes to take the occasional trip down memory lane aboard what was arguably the finest turbo-prop airliner of all time.  The book deserves every success.