Awarded for outstanding service in the air, at the discretion of the Master. 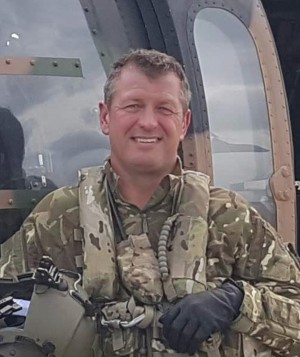 Major Anderson is an exceptionally experienced A2 Qualified Helicopter Instructor (QHI), instrumental in the development of peers and subordinates across Army Aviation. This citation marks 30 years, circa 6000 flying hours across five helicopter platforms and dedication to aviation instruction and assurance. He is truly a master in his field.

Initially qualifying on Gazelle in 1992, Maj Anderson spent the next 11 years in and out of Northern Ireland (NI) on Operation Banner, including several voluntary six-month tours. In 1994 he achieved aircraft commander status and in 1996, given his already vast experience and natural flying ability, was selected for operations in support of UK Special Forces in NI. He commissioned in 2006 and was appointed the Rotary Wing Project Officer, Handling Sqn at MOD Boscombe Down. He completed a Squirrel conversion while concurrently instructing on Gazelle and Lynx.

Completing the QHI Course in 2009, Maj Anderson was appointed Second in Command, 671 Sqn delivering Lynx conversion and refresher courses. He proved to be a highly talented QHI, maintaining a very high flying rate and making significant contributions to the generation of pilots in support of Operations HERRICK and TELIC.

Maj Anderson completed Lynx Mk9A conversion in 2012, he was appointed Training Officer of 657 Sqn supporting UKSF domestic and overseas commitments. Over six years he deployed to Oman, Norway, Belize, Afghanistan twice on Operation LANDSBURY and to Kabul as the PJHQ Rotary Wing Safety Standards Officer. Whilst deploying on every major Sqn exercise and developing new and established Sqn members, he also achieved A2 upgrade confirming his QHI capacity and capabilities. He was instrumental in ensuring the unit achieved a Very Satisfactory grade during the JHC Single Service Standards Inspection. This is noteworthy as these achievements were set against the Sqn’s return from operations, manpower pressures and maintenance of Very High Readiness in support of UK Counter Terrorism.

Recognising Maj Anderson’s ability and diligence, he was appointed Regimental QHI (FIND) in 2020. He is the principal aviation subject matter expert for Gazelle and Bell 212 operations and is directly responsible to the Senior Operator for first party assurance, standardisation and supervision. More recently, he has held the Senior Operator position answering directly to the Delivery Duty Holder.

Major Anderson’s full military aviation career is an exemplary display of selfless commitment and dedication. He is an experienced operator, truly professional and a highly capable instructor. As a leader, coach and mentor he has been pivotal in the development of subordinates and peers across a wide range of platforms. His service record and contribution to UK Defence has been outstanding. For his long and outstanding service and devotion to duty in the air, Major Kevin Anderson is awarded the Master’s Commendation.