Awarded to an individual, a group or organisation involved in any branch of aviation in the Australian Region or to Australian nationals abroad, who or which has made a meritorious contribution to any aviation activity, either by displaying technical excellence or by the development of a procedure or operational technique of an outstanding nature. 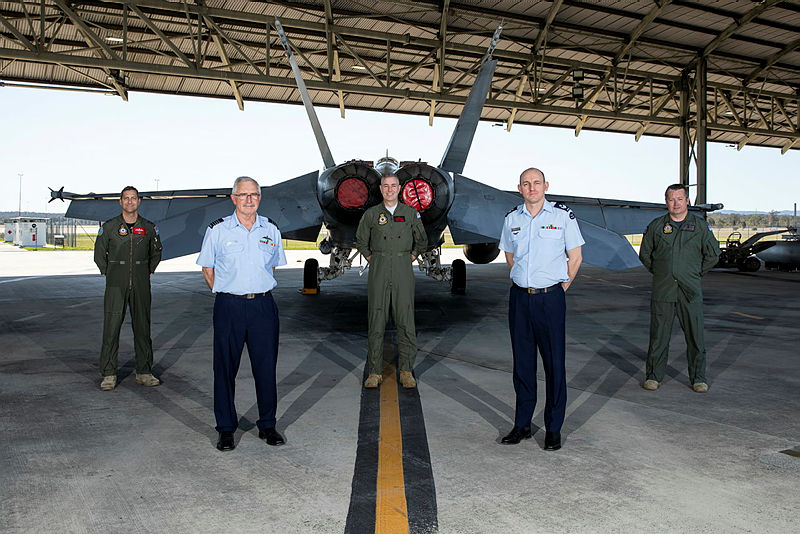 Planning for the event required significant and complex effort over a period of nine months, and culminated in the majority of the current Royal Australian Air Force inventory and over a dozen historic aircraft being represented in the flypast. In all, 57 aircraft with varying performance characteristics participated, many making multiple appearances over a period of ninety minutes. Flightpaths, holding patterns and timing gates were developed by the team to ensure a seamless and safe display was achieved.  The display aircraft were supported by air-to-air refuelling assets and a coordinating Airborne Early Warning and Control aircraft. Participation was also coordinated with Australian Army helicopters, in recognition of the service from previously Royal Australian Air Force operated rotary-wing aircraft, and a Royal Australian Navy Seahawk helicopter that ‘paraded’ the underslung Royal Australian Air Force Ensign to the significant crowd.

Group Captain Tim Sloane and his team of four undertook all of the planning and liaison for the event. This included liaison with multiple Royal Australian Air Force units and organisations, the operators of the civilian operated historic aircraft, civilian and military air traffic agencies, and approval authorities from the Australian Defence Force and the Civil Aviation Safety Authority. During conduct of the event, all team members played an active role in ensuring formation timings, leadership, management, and safety were maintained.

Organisation and execution of the event was not without challenges. Due to the fluid COVID-19 restrictions, several team members spent some time in quarantine and were therefore required to continue their work remotely. COVID-19 also meant that the planned communications network was unable to be established, so the team quickly implemented an alternate solution. Further, one team member was isolated for a number of days due the New South Wales floods. The final hurdle overcome was the threat of a number of aircraft from Queensland based units being unable to participate due to the last minute COVID-19 lockdowns, requiring late-night contingency plans to be developed in the event the threat was realised.

Despite these challenges and the constantly changing environment, Group Captain Sloane and his team maintained a quiet determination to ensure the event showcased to best effect the past and present Royal Australian Air Force; which was a fitting tribute to the more than 350,000 Australians who have served, and the more than 11,100 of these who have paid the ultimate sacrifice.

On the day, the event went off without incident. That it achieved the aim of spectacularly and safely showcasing 100 years of the Royal Australian Air Force is not in doubt. Indeed, the significant crowd of both public and Australian Defence Force members surrounding Lake Burley Griffin burst into spontaneous applause at the culmination of the ninety minute series of timed flypasts and grand parade of heritage and current operational aircraft.