Awarded to a member or members of a crew whose outstanding behaviour and action contributed to the saving of their aircraft or passengers.

A standard airline crew were tasked with recovering an Air Astana Embraer 190 after a Check C in Portugal to the home base of Air Astana in Almaty, Kazakhstan.

On arrival Captain Aushev met up with the rest of the ferry crew – First Officer Karasholakov, and the Safety Pilot, First Officer Sokolov. The aircraft having been signed off as “C” check complete, a normal pre-flight series of checks were initiated. Weather checks revealed that there were potentially difficult met conditions in Minsk – snow, low cloud base and reduced visibility. The plan was to fly a single approach to Minsk and then, if necessary, divert to Sheremetyevo airfield, Moscow. 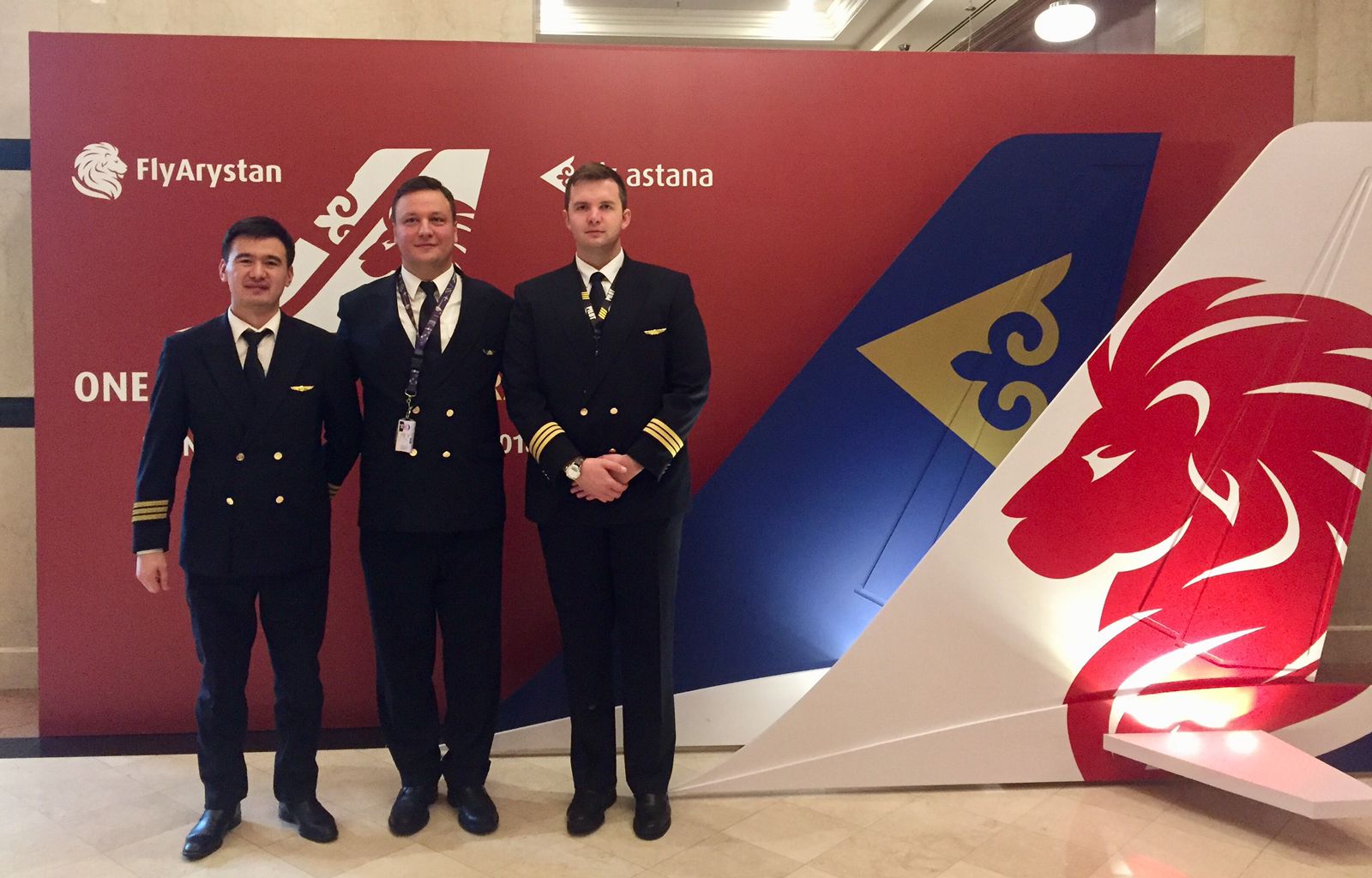 On start-up it was apparent that a lot of rain had fallen – puddles forced the recalculation for a “contaminated runway” take off. Change of configuration (flaps 4 – close to a landing configuration), and full thrust. Finally, there were changes of runway between runway 22 and 04.

The trouble started about 10 seconds after becoming airborne, when small, unexpected oscillations in roll alerted the crew to a problem.  The oscillations gradually built up, but the aircraft continued to climb (full thrust already selected). The crew experienced further un-demanded roll and yaw inputs, resulting in big changes to aircraft attitude – the aircraft was effectively uncontrollable. With the higher angles of bank, the nose dropped, and pitching to recover the altitude only helped as the aircraft rolled through a nearly-wings level attitude.

The major problem was that there were no indications as to the source of the problem, but the fact that the flight control software had been reloaded led to the initial conclusion that it was perhaps this which created the difficulty. So – first of all at 1000 ft after take-off, the autopilot was selected to see whether it could manage the situation. It was not able to do so. Then the crew coordination kicked in even more deliberately as the flap was raised by increments – each one confirmed by the safety pilot before selection. The least destabilising configuration was found to be with the flaps set at 1.  It was then decided to selectively and separately disengage the control channels – first of all roll, then yaw, then pitch. The sequence was for confirmation that the two pilots were ready – then the safety pilot deselected the notified channel. In the meantime there were extreme excursions from level flight resulting in major changes to altitude and heading. The tendency was always to turn to the left. Given that the cloud-base on take-off was 300 feet there was no realistic chance to descend to VMC under control, so the clawing for altitude continued, hoping to get VMC on top. It was also decided that, given that an uncontrolled crash into terrain was a distinct possibility, the marginally better bet was to go for a ditching. 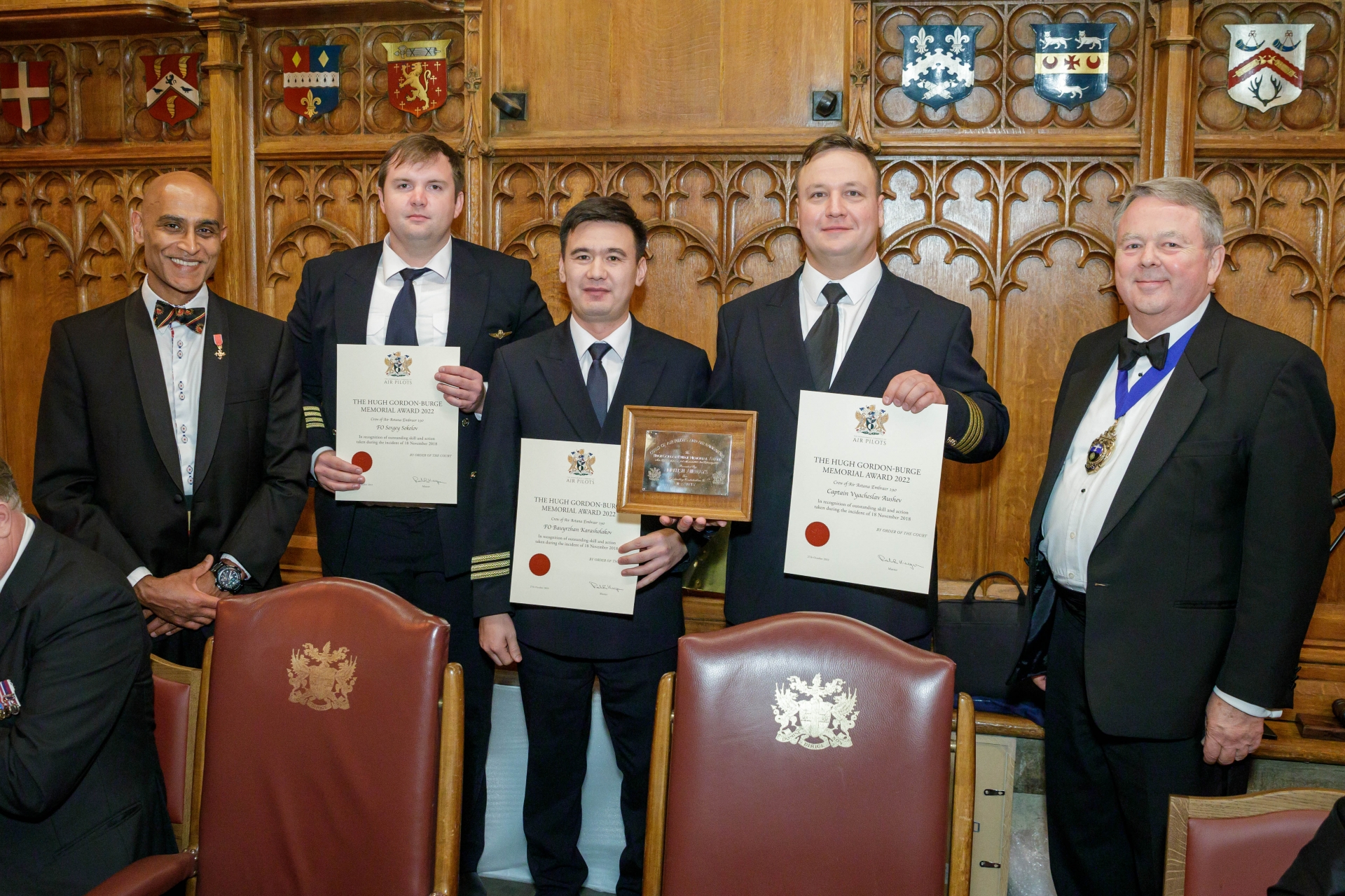 Having decided on ditching as the least dangerous way of getting down, repeated requests for a heading to the sea were required, the problem being that, with an aircraft which could not keep a steady heading “for more than 1 second” there was no way that such a course could be maintained. VMC was finally discovered at about 18,000 feet, but a frightening plunge had the aircraft in a near vertical descent, the altimeter unwinding so fast that it was unreadable, airspeed in excess of 350 kts IAS, loud aerodynamic noise and, as they pulled out as firmly as they dared –over the strident calls from the GPWS, a creaking sound from the airframe.  As they pulled out, still IMC, the safety pilot saw a glimpse of a hill in front of them but decided it would not help the team to call that as they were doing the maximum to recover anyway.

ATC then offered a fighter escort from the Portuguese Air Force to help to navigate to the sea, and two F16s were scrambled to get to them. The join up was a little dramatic, in that the TCAS reacted vigorously to the presence of other aircraft, until the fighters modified their approach.

The engineers called forward with their list of tasks carried out during the C check, and they came to the “Aileron Cables Changed”.

If that was the core problem, then moving the aileron in the opposite direction would work. The engineers were dispatched to the cabin to report exact aileron deflection as a result of cockpit roll input. There was quickly confirmation that this was the crux of the problem.

Once again, the crew cooperation came to the fore. Each time a control input was being considered all three pilots cross-checked and confirmed before and during the control deflection.

The decision was to try for a suitable airfield with VMC and a long runway. The military air base of Beja was identified and a diversion initiated, with the F16 leading and with updated vectors from ATC. During the descent on finals the aircraft started rolling again as the natural reversion to traditional control inputs cut in. The decision was to go around (with no complicating change of configuration). At this point Captain Aushev realised that his tank was almost empty, and that FO Sokolov was fresher than the two pilots in the operating seat.

The role of captaincy could be defined as using all available resources to best effect to ensure the safe conclusion of a flight. It is here that Captain Aushev demonstrated that principle to the ultimate. Recognising his own fatigue, he allocated the seat and landing to the Safety Pilot, First Office Sokolov.  Although this individual had been subject to same emotional stress as the others in the crew, he had not had the same physical workload. He was entirely familiar with the situation and understood what was required to execute a successful landing. The aircraft was still difficult to control, and, in fact, a second go around had to be initiated as another unstable approach was recognised.

It was then decided to use rudder only for directional control from very short final to touchdown.

For the next attempt the F16 was used to lead to a 3-mile short final. At a low height the aircraft was better set up for the unofficial runway 19 Left (a former taxiway) which was immediately in front of the aircraft. Permission to land on that was requested at short notice, and immediately authorised by the military controller, and a successful landing was accomplished.

For their outstanding behaviour and action throughout this incident, culminating in saving the lives of all onboard and the aircraft, Captain Aushev, First Officer Karasholakov and First Officer Sokolov are joint recipients of the Hugh Gordon Burge Memorial Award.