Awarded for outstanding performance in the operation of airborne or space systems, manned or unmanned. 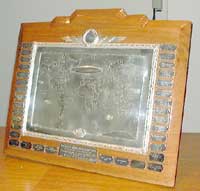 Sentinel was introduced into Royal Air Force service with V (Army Co-operation) Squadron in 2007 before flying its first operational mission in 2008 on ‘OP Herrick’ over Afghanistan, offering clear and timely understanding of the ground environment through an airborne stand-off radar capability. Sentinel has repeatedly surpassed commanders' expectations, earning itself a unique place in the UK’s military contribution to warfighting and peace support operations around the world, including in Europe, Libya, sub-Saharan Africa, Iraq and Syria.

In January 2021, Sentinel flew its final deployed operational sortie from Cyprus on ‘OP Shader’ – the UK's contribution to the Counter-Daesh Coalition in Iraq and Syria. Writing on the occasion of its withdrawal, the UK's Chief of Joint Operations, Vice Admiral Sir Ben Key, cited Sentinel’s invaluable life-saving contribution to operations, adding, ‘Right to the end of its commission, V(AC) Squadron has been a constant among my deployed Force Elements. It is a record to be proud of.’  The Commander of the United States’ 9th Air Force and Air Force Central Commander, Lieutenant General Gregory Guillot, also commended Sentinel, remarking that, ‘Sentinel has been a vital RAF contribution to Coalition operations…providing tipping and cueing for potential threats across the Levant, Libya and Mali.’

Coinciding with much of the Force’s deployed time on ‘OP Shader’, Sentinel aircraft maintained a relentless programme of strategic reconnaissance missions for NATO on the Alliance’s eastern flank, flying from RAF Waddington. Tasking accelerated as the aircraft approached its 2021 retirement, its radar precisely picking out the displacement and identities of naval, air and land-based units in all weathers. It was a fitting finale for a capability that had earned its spurs in the skies over Afghanistan; having innovatively mapped the dreadful flooding in England in 2007; provided vital intelligence during intense air operations over Libya; and, in response to the kidnapping of the Chibok schoolgirls in Nigeria, and in order to counter the uprising of Violent Extremist Organisations in the country, deploying and subsequently mapping the whole of Nigeria within 10 sorties using its airborne radar – a unique effort of intelligence collect while accomplishing UK diplomacy.

By any standard, Sentinel’s achievements have been consistently remarkable. With an unmatched serviceability record, it has flown over 32,000 hours in almost 5,000 sorties, the majority being on operations.

Underpinning the Squadron’s successes have been the tireless endeavours of all those involved in the Sentinel Force, from support elements at RAF Waddington and Defence Equipment and Support, to the unstinting assistance of Raytheon Systems Limited. Aries Flight within 1 Intelligence Surveillance and Reconnaissance Wing merits special mention. For years, it has played a pivotal and equal role with V(AC) Squadron in exploiting Sentinel’s output, providing a forensic view of the data significantly enhancing the output of the Squadron and complimenting the near-real-time analysis provided by the mission crew.

In recognition of its unparalleled contribution to Royal Air Force, NATO and Coalition operations over the past fourteen years, the Sentinel Force is awarded the Johnston Memorial Trophy.