Awarded to an individual, a complete aircraft crew, or an organisation, for an outstanding contribution to air transport or transport aircraft operations. 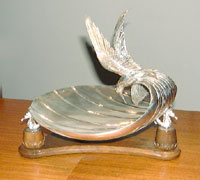 Number 32 (The Royal) Squadron of Royal Air Force Northolt, delivers Command Support Air Transport (CSAT) to members of the Royal Family, Government Ministers and senior military leaders, and has done so for the last 50 years. The Squadron and its industry partners, British Aerospace, SERCO and Sloane Helicopters, have been nominated for their invaluable contribution to UK Government activity, most notably their support during the last year of EU withdrawal negotiations, whilst in parallel, having to operate their aircraft from RAF Benson during RAF Northolt's runway resurfacing operations. The Squadron and its partners have delivered well beyond their remit, often at very short notice, to provide an exceptional VVIP service to both the Prime Minister and senior government officials.

The Squadron provides four BAe146 aircraft and one Augusta 109SP in support of Key Leadership Engagement activity and a wide range of military transport tasks. In the past 12 months the tasks have varied considerably and included timely and cost-effective transportation of the Prime Minister, the Defence Secretary and the Foreign Secretary to their respective engagements throughout Europe, North Africa and the Broader Middle East. Given the unrelenting pace of EU withdrawal negotiations and concomitant tempo of Governmental activity, the Squadron has often been called upon at extremely short notice and has not failed to deliver.

Providing this level of complex and dynamic tasking has been even more impressive because it has been delivered away from the Squadron’s logistical support base at RAF Northolt, a deployment known as Operation BOLTHOLE operating from RAF Benson. Operational support was not only required for the BAe146 aircraft at RAF Benson, but concurrently for the A109 helicopter operating from RAF Northolt, bringing added complexity to operations given the need to co-ordinate personnel, logistics and engineering between the two sites. Moreover, the addition of an ‘airbridge’-dedicated A109 to facilitate transport for London-based VVIPs necessitated a substantial increase in tasking. Significantly protracted working hours were often required by all personnel, a challenge that was readily accepted by this highly committed, loyal and professional team, upholding the Squadron’s and RAF Northolt’s highly regarded reputation. During the entire deployment not a single task was lost and over 80 VVIP tasks were seamlessly delivered.

The members of number 32 (The Royal) Squadron and its contracted engineering support partnerships have been tested many times during the Squadron’s illustrious history, but none more so than over the past 12 months, which has required teamwork and dedication across the Whole Force to ensure unwavering support to the Government, despite the challenges of Operation BOLTHOLE. With limited manpower, an ageing aircraft and difficult circumstances, the Squadron has delivered everything that has been asked of it.  Moreover, it has done so with a professional, good-humoured and ‘can-do’ attitude.

In recognition of unstinting professionalism and commitment in support of the UK's strategic interests, Number 32 (The Royal) Squadron and its industry partners are thoroughly deserving recipients of the Brackley Memorial Trophy.